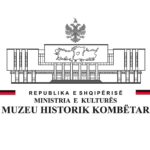 The National Historical Museum aims to promote understanding and appreciation of Albania’s history among the local, national and international public and to encourage dialogue between citizens on the Albanian past, present, and future. For this purpose, it acquires, preserves, and studies material and non-material evidence of the historical and cultural heritage of Albania, which it communicates and presents in an environment that promotes education and entertainment. It also organizes and facilitates activities that support its vision and mission. The “National Historical Museum” was inaugurated on October 28, 1981, and is the largest museum institution in Albania. The “National Historical Museum” building occupies a total area of ​​27.000 m2 and has an exhibition area of ​​18.000 m 2 and a total volume of 81,000 m 3. In the museum premises, there are about 4750 objects, which belong to a relatively long period of time starting from the 4th millennium BC and up to the second half of the 20th century. The museum is designed to be presented through eight pavilions.

Of particular interest is the “Mesaplik Mosaic”, which was discovered in 1979 by archaeologist Damian Komata and since 1981 has been in the “National Historical Museum” in Tirana. The mosaic measures 230×349 centimeters and consists of small cubic stones creating zoomorphic figures. The main figure in the mosaic is that man. He is shown in profile smiling and on his head, he wears a hat with an antenna, to which a double cord is tied. In front of the person’s face is written a phrase set in column form that reads APARKEAS, which is thought to have been the name of the mosaic’s founder. A mosaic masterpiece is “The Beauty of Durrës”, which dates back to the 4th century BC. The mosaic presents the portrait of a woman and is made of tiles of different shapes. In the center of the mosaic is the head of the beauty, which is surrounded by large bisques with swirls, wheels, lily flowers, and bell flowers, which simultaneously fill the entire surface of the mosaic.

Pavilion of the Middle Ages two halls are dedicated to him where visitors have the opportunity to learn about the economic, social, political, and cultural development of Albanians in the period from the 6th to the 15th century. In the stands of the museum, there are many documents, which testify to the resistance of the Albanian people to the foreign Byzantine, Angevin, Serbian and Ottoman invasions. In various showcases, original objects of handicrafts, coins of Albanian principalities, coats of arms of Arbëro princes, etc. are presented. A special place is occupied by the exhibition of a large number of works of art and architecture such as the fortresses of Berat, Shkodra, Prizren, and Durrës. In the museum, there is the monumental gate of the John Vladimir Monastery in Elbasan with the coat of arms of Prince Karl Topia. This gate dates back to the 14th century. Yes, in this century we also have the Epitaph of Gllavenica, which dates back to 1373 and was discovered in the cellar of a ruined house near Ballshi. The epitaph of Gllavenica is embroidered with gold thread on soft silk by the hand of the monk Savia by order of Gjergj Arianiti.

The National Renaissance Pavilion provides a complete overview of the economic, political, and cultural development of Albania from the beginning of the 19th century to the eve of the Declaration of Independence. The era of Skanderbeg’s wars appears glorious, because with his name, for 25 years in a row, the anti-Ottoman movement of the Christian world was inspired. Through the objects exhibited in the stands and showcases, the visitor has the opportunity to get to know the products of the Albanian artisans in different cities of Albania, such as Shkodër, Prizren, Elbasan, Berat, Korçë, etc. A map graphically presents the trade links between the country’s cities and those of the Balkans and beyond.

The Independence Pavilion opens with the activities of the National Government of Vlora and the organization of the independent Albanian state. Furthermore, through documents and maps, the visitor has the opportunity to become familiar with the unjust decisions of the Conference of Ambassadors in London, in 1913 regarding the borders of Albania, with the bargains of the Great Powers to the detriment of Albanian lands, with the strong attitudes of the representatives of the National Government of Vlora, as well as with popular protests throughout the country to oppose these decisions. In this pavilion, an important place is occupied by the Vlora War of 1920 as well as the activity of the government headed by Fan Noli in 1924.

Iconography Pavilion has a collection of 65 icons from the XIV-XIX centuries on display, where the visitor is introduced to the great masters of Albanian iconography, starting with Onufri, his son Nikolla, Onufer Cypriot, Kostandin Shpataraku, David Selenicas, Kostandin e Athanas Zografi, Mihal Anagnosti, the Çetiri brothers, Kostandin Jeremonaku and many anonymous authors. Iconography was born, triumphed, and developed together with Christianity. The icons are painted on the board and then placed in the iconostasis in a certain order. The Byzantine art of icon painting was strictly subject to church canons. The iconographer was not allowed to change the content and rules that determined the sacred canons and church tradition. The faces of the saints that appear in the icons express asceticism and humility because they were people who fasted,

The Ethnocultural Pavilion presents traditional Albanian costumes from different provinces of Albania. They belong to the XIX-XX centuries. Their origin is from all over the world: traditional costumes of Tirana, Zadrima, Korça, Gjirokastra, Kukës, Labëri, etc. This collection is enriched with 32 Arbëresh costumes of Italian Albanians. The Albanian Ethnoculture Pavilion was created in 2005 and contains about 250 objects.

The Anti-Fascist War Pavilion in which the events from the War of Vlora (1920) are presented, then continues with the events in the 20s – 30s after the fascist dictatorship of Benitto Mussolini came to power in Italy. The importance is given to the Spanish War and the Albanian volunteers who participated. For the first time, anti-fascism in Çameri, the organization of the population of this province in the anti-fascist resistance, takes place in this pavilion. In the pavilion, there are many relics of martyrs or heroes of the people, fallen in the war against Italian-German Nazism. The Antifascist Pavilion has about 220 objects and was erected in 2004.

The Communist Genocide Pavilion was opened in 1996 and covers events from 1944-1991. This pavilion contains 136 objects. In its first showcases, facts, photos, and documents have presented that present the creation of political forces such as “Balli Kombëtar” and “Legaliteti”. Next, the visitor is introduced to the denunciation of the Mukje Agreement by these nationalist forces. A large place is then covered with many documents and photos of the purge operations of the anti-communist forces, the special trial against political opponents during the war, as well as the liquidation of the anti-communist opposition. In the showcases, the visitor is also introduced to numerous relics of people convicted or shot by the regime of the time.