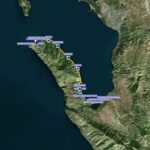 Easily accessed by a short boat ride from Vlora Bay, this peninsula has become one of the top destinations of the Albanian Riviera.

The Karaburun Peninsula, the only maritime park in Albania, is a must-visit, especially in the hot summer months. Stretching across Vlora Bay, the peninsula is shaped like a finger that points to the breathtaking landscape surrounded by turquoise waters. A spectacular natural reserve, this entire area is now internationally famous for the intimate, pristine bays scattered throughout and its thriving nature.

Virgin rugged beaches punctuate the entire Karaburun landscape. What makes it even more impressive is the area known as the Balcony of Karaburun, which stretches over its ridges. Jagged cliffs descend on the caves and slopes of rock formations over Dafina Beach or the shore of Bitri. The views from this point are particularly amazing!

Caves are a typical feature of this peninsula, one of the most famous being that of Haxhi Alia. Known as the largest sea cave in Albania, a calm lake rests within it, surrounded by stalactites and stalagmites. No less well-known is Grama Cave, which hides in the bay of the same name. Various inscriptions found inside the cave date it to various historical periods, times when sailors and pirates would find shelter from the storm inside these cliffs.

For a long time, Karaburun was a forbidden area as it extended along a high-security perimeter. It is perhaps due to this enforced seclusion, that the peninsula has remained mostly untouched. The last few years, however, have seen a steep rise in its popularity and, nowadays, there are daily tours to this beautiful rugged beach. During the summer months, Gjuhëza Cape is populated by tourists searching for water adventures and virgin beaches. The fresh, emerald waters invite you to dive in while the finely-grained white sand is ideal for sunbathing. Brisan Bay, as well, is an especially cinematic beach, an ideal location for an adventure film!

Though the peninsula has always been well-known, in the last decade, Karaburun has become increasingly popular, hosting some of the coolest land and boat parties of the summer. People reach this uninhabited island via boats that leave from the coast of Vlora or, for the more adventurous spirits, via jet skis.